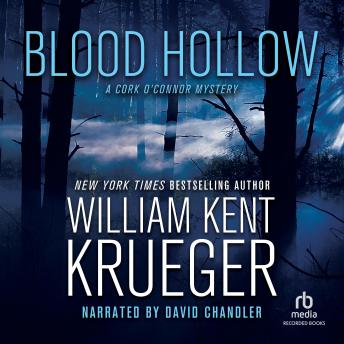 Multiple Anthony Award winner William Kent Krueger returns to Minnesota's North Woods country for another chilling entry in his Cork O'Connor series. In this thrilling mystery, former sheriff Cork O'Connor confronts the paranormal while investigating baffling murders. After 17-year-old Charlotte Kane-the beautiful, brilliant, and brooding daughter of a rich widower-disappears on a drunken New Years' Eve snowmobile ride, a raging blizzard soon snuffs out all search efforts. When her body is found during the spring thaw four months later, preliminary evidence implicates her ex-boyfriend-Ojibwe bad-boy, Solemn Winter Moon. But then a second Charlotte Kane turns up dead, and Cork isn't sure of anything any more. David Chandler's riveting narration of this hair-raising novel highlights the mystical elements in an electrifying tale of intrigue and foreboding. Listeners certainly won't want to miss Krueger's acclaimed Copper River. 'Krueger skillfully crafts enough plot twists to keep everybody guessing through the bloody climax to the thrilling end.'-Publishers Weekly '[Blood Hollow] takes Krueger's work to an entirely new level. The prose is so good and the plotting so deft that readers will be hard put to stop reading once they begin.'-Chicago Sun-Times

This was a good book. at first I didn't think I was going to get into it but it was pretty good.

these stories keep me wanting to read more. Again the narrator does an amazing job with the characters. interesting twist at the end.

Love every book by William Kent Krueger that I have Read or listened to. He tells great stories with fully developed characters. Narrator also did a fine job. Plan to read the entire series if they remain as strong as the first ones have been. Also really like the native American aspect. Have never traveled to this part of America, but his writing brings it to life.

Enjoyed this book, getting ready to start his next in the series

A great series of adventures