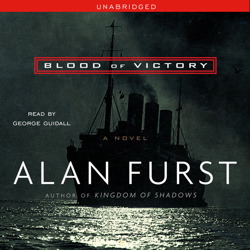 In the autumn of 1940, Russian émigré journalist I. A. Serebin is recruited in Istanbul by an agent of the British secret services for a clandestine operation to stop German importation of Romanian oil—a last desperate attempt to block Hitler’s conquest of Europe. Serebin’s race against time begins in Bucharest and leads him to Paris, the Black Sea, Beirut, and, finally, Belgrade; his task is to attack the oil barges that fuel German tanks and airplanes. Blood of Victory has all the heart-pounding suspense, extraordinary historical accuracy, and narrative immediacy we have come to expect from Alan Furst.