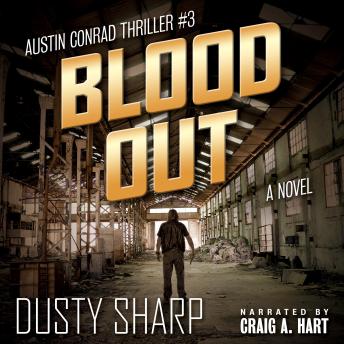 Craig A. Hart
A free trial credit cannot be used on this title

A repentant outlaw on the run. A murderous gang seeking vengeance. A violent past that haunts them all.

Austin Conrad narrowly survived the opening battle in the war against his former brothers in the Rattlers Motorcycle Club. A war that started when the club’s ruthless leader crossed a line that even Austin’s questionable morals could not condone. Now both sides are gathering their strength, plotting their next move, coiling to strike. The adventure moves from the gritty streets of Las Vegas to lonely desert outposts and the seedy underbelly of inland Southern California. Austin is in a race against time to dismantle the MC’s human trafficking ring before more lives are destroyed. Along the way, dark secrets from the past begin to surface, calling into question everything Austin thought he knew about brotherhood, family, loyalty and honor.

Blood Out is the third book in the Austin Conrad Thrillers series. If you like fast-paced adventure, vividly real settings and a flawed but unstoppable antihero, then you’ll love this action-packed vigilante justice thriller from breakout author Dusty Sharp.

Download Blood Out today and find out why readers are hailing Austin Conrad as “Jack Reacher meets Sons of Anarchy!”