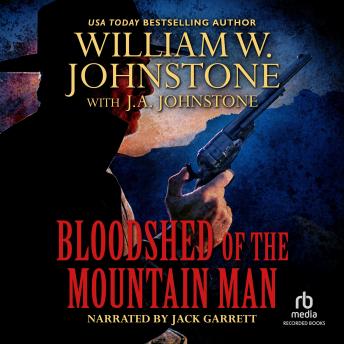 Bloodshed of the Mountain Man

Where There's Fire, There's Smoke Smoke Jensen has journeyed up to the Colorado Rockies to a sell a prized bull to a local rancher. Instead, the rancher and his wife have been mercilessly slaughtered by outlaws only moments before Smoke's arrival. In a hail of bullets, Smoke pulverizes two of the murderers and drags two others to the town of Brown Spur for justice. Come hanging day, the two killers are on the way to the gallows when a thundering gang of raiders crashes into town and rescues them from the jaws of death. When the bloody onslaught is over, dead bodies litter the streets, and Smoke Jensen is a man on a mission. Calling themselves the Ghost Riders, a savage gang of outlaws has stealthily moved in from Wyoming Territory. Smoke now has a personal motive for going up against the Ghost Riders. No matter how many they are, no matter how many guns they have, he'll hunt them down-one killer at a time...

Bloodshed of the Mountain Man