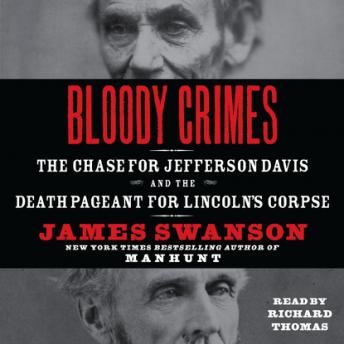 Bloody Crimes: The Chase for Jefferson Davis and the Death Pageant for Lincoln's Corpse

In Bloody Crimes, James L. Swanson—the Edgar® Award-winning, New York Times bestselling author of Manhunt—brings to life two epic events of the Civil War era: the thrilling chase to apprehend Confederate president Jefferson Davis in the wake of the Lincoln assassination and the momentous  20 -day funeral that took Abraham Lincoln’s body home to Springfield. A true tale full of fascinating twists and turns, and lavishly illustrated with dozens of rare historical images—some never before seen—Bloody Crimes is a fascinating companion to Swanson’s Manhunt and  a riveting true-crime thriller that will electrify civil war buffs, general readers, and everyone in between.

Bloody Crimes: The Chase for Jefferson Davis and the Death Pageant for Lincoln's Corpse