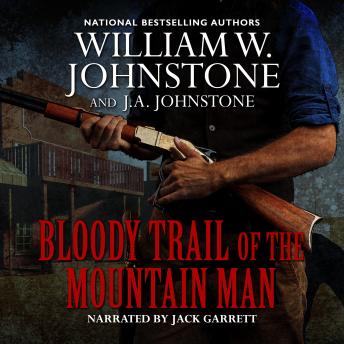 Bloody Trail of the Mountain Man

Johnstone Country. Mountain Man Justice. If there's one thing Smoke Jensen hates, it's a man who fights dirty. And no one fights dirtier than a politician. Especially a lying, cheating, no-good grifter like Senator Rex Underhill. Luckily, with another election coming up, this senatorial snake in the grass has some serious competition: Smoke's old friend, Sheriff Monte Carson. Carson's an honest man, and he's got Smoke's full support. But Underhill's got support, too: a squad of hired guns ready to hit the campaign trail-and stain it red with blood . . . Swapping bullets for ballots, Underhill's henchman make it all too clear that Sheriff Carson is not just a candidate on the rise, he's a target on the run. But with Smoke's grassroots support-and lightning-fast trigger-he manages to stay alive in the race. That is, until Carson's righteous campaign takes a near-fatal turn when the Senator Underhill tricks his opponents, traps them in a mine, and literally buries the sheriff's political ambitions. When the going gets tough, Smoke gets even. When this game turns deadly, it's winner kills all . . . Live Free. Read Hard.

Bloody Trail of the Mountain Man