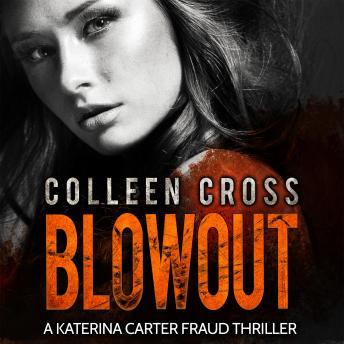 On private investigator Katerina Carter’s trip to a remote island aboard a luxurious yacht, she suspects the boat’s slick and charming owner is hiding a dark secret. Kat tries to warn her friends that something is very wrong with their host and that his moneymaking scheme smells fishy.

Why is she the only one who thinks he’s not being completely honest?

While exploring the island, Kat uncovers a sinister cult, the Aquarian Foundation, and searches for its rumored buried treasure. The cult swindled people out of their money and, too often, their lives. It's a situation eerily similar to her own. She knows that when something sounds too good to be true, it is.

As Kat’s warnings fall on deaf ears, she uncovers a horrifying truth that places her loved ones in mortal danger. Now it’s a race against the clock for Kat to expose a killer before he strikes again.

Blowout is the third book in the Katerina Carter Fraud Legal Thriller series and appeals to crime thriller fans of James Patterson and Michael Connelly.

This title is due for release on February 7, 2021
We'll send you an email as soon as it is available!