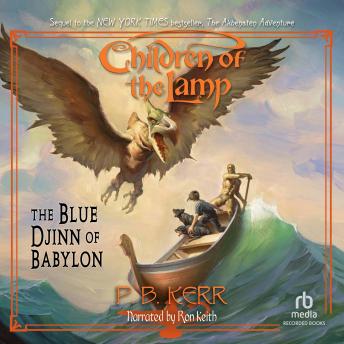 The Blue Djinn Of Babylon

Best-selling author P.B. Kerr wowed readers with The Akhenaten Adventure, the first entry in his critically acclaimed Children of the Lamp fantasy series. In this thrilling sequel, twins John and Philippa Gaunt-descendants of a long line of djinn-face the evil and terrifying Blue Djinn of Babylon. The Solomon Grimoire-a powerful book of magic-has gone missing. When John and Philippa are chosen to retrieve it, their quest sends them trotting across the globe. But what they don't know is they are being lured into a trap by the Blue Djinn. When Philippa falls right into the trap, John must embark on a perilous adventure to save his sister. With this second effort, Kerr has established the Children of the Lamp series as a masterful saga that deserves consideration alongside the classics of fantasy fiction. Narrator Ron Keith brings Kerr's wondrous world to full and glorious life with his dynamic performance.