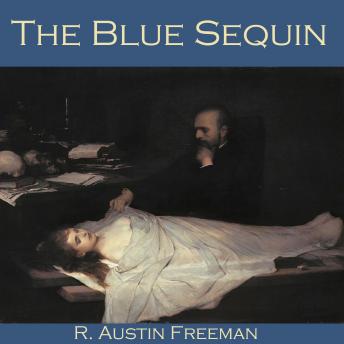 Richard Austin Freeman (1862 - 1943) was a British writer of detective stories, many featuring the investigator Dr. Thorndyke who uses a mixture of medical and forensic techniques to solve the most baffling crimes.

In "The Blue Sequin" a beautiful young woman as been found alone, dead in a railway carriage, with a peculiar combination of head injuries inflicted with great force by a sharp round implement. Suspicion immediately falls on her former lover, an artist, with whom she had quarrelled earlier, and who is in posession of her locket and a stout umbrella with a pointed end. But Dr. Thordyke is not convinced of the artist's guilt and sets out to investigate....