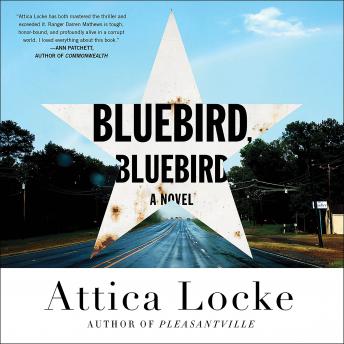 A 'heartbreakingly resonant' thriller about the explosive intersection of love, race, and justice from a writer and producer of the Emmy-winning Fox TV show Empire (USA Today).

'In Bluebird, Bluebird Attica Locke had both mastered the thriller and exceeded it.'-Ann Patchett

When it comes to law and order, East Texas plays by its own rules -- a fact that Darren Mathews, a black Texas Ranger, knows all too well. Deeply ambivalent about growing up black in the lone star state, he was the first in his family to get as far away from Texas as he could. Until duty called him home.

When his allegiance to his roots puts his job in jeopardy, he travels up Highway 59 to the small town of Lark, where two murders -- a black lawyer from Chicago and a local white woman -- have stirred up a hornet's nest of resentment. Darren must solve the crimes -- and save himself in the process -- before Lark's long-simmering racial fault lines erupt. From a writer and producer of the Emmy winning Fox TV show Empire, Bluebird, Bluebird is a rural noir suffused with the unique music, color, and nuance of East Texas.

I think it's so important for author's to choose the right reader for their books. This was simply the wrong reader for this book. The protagonist is a Texan - a rural Texan, and the narrator read the narration and the main character in a stilted, flat, radio-announcer voice that belonged in Danbury, Connecticutt or some other such educated, Brahmin town. It simply didn't work at all. Mr. Jackson has an amazing voice, but the characterization was such a mis-match that I often felt I would just give up and turn it off.