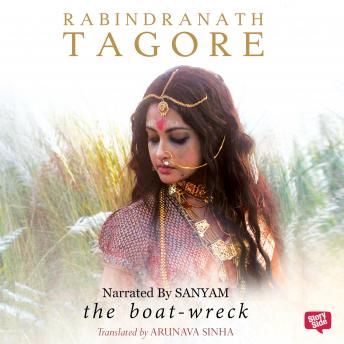 'Tagore picks up the flotsam of a love story from the Ganga and narrates it like only he can. An eternal human story.'- Gulzar After a boat-wreck overturns his life, Rameshchandra Chowdhury mistakes young Kamala for his newly wedded bride. They move away from Calcutta to start a domestic life together, even as Ramesh is unable to forget Hemnalini, whom he was always in love with, but could not marry. Meanwhile, Hemnalini must steel her heart, while her hypochondriac father and hot-headed brother seek grooms for her. When Nalinaksha, a serene and influential doctor, enters the scene, fate decides to rock the boats again. Initially serialized in Bangadarshan magazine between 1903 and 1904, and then published as a novel in 1906, Noukadoobi was Tagore's exercise in psychoanalytical probing of an ensemble cast of characters, to reveal not just their individual pains and passions, but also the collective consciousness of the society of the period. Narrated in warm tones that reveal the tenderness of everyday life, and translated gracefully by Arunava Sinha, here is a story about love and sacrifice, faith and resilience that is timeless.