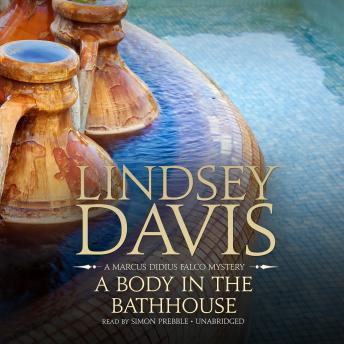 A Body in the Bathhouse: A Marcus Didius Falco Mystery

#13 of The Marcus Didius Falco Mysteries

The thirteenth novel featuring sleuth Marcus Didius Falco explores the fervor of home improvement that’s sweeping the Roman Empire and Falco’s own household, specifically the bathhouse—where a body turns up.

Some things never change. With his new villa, Falco also gets a timeless headache: building contractors. After the departure of two shady plasterers, a rank odor in the bathhouse soon leads to the discovery of a corpse under the mosaic floor. Should Falco follow the culprits to remote Britannica? Despite the British weather (damp), the inhabitants (barbarians), and the wine (second-rate), Falco takes his whole family and goes. In veritas, Falco has another, secret reason for this exodus—his sister Maia has rejected the affection of a powerful Roman official, who vows brutal revenge. Now to protect those he loves, Falco must outrun an imperial enemy with a very long—and very deadly—reach.