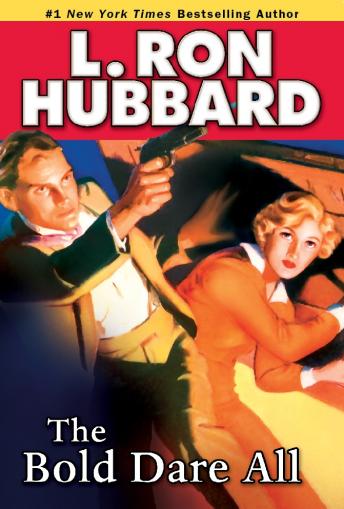 The Bold Dare All

As brash and bold and daring as Steve McQueen, Lieutenant Lee Briscoe will never back away from a good cause or good fight.  And when it comes to heroism, he and McQueen are in the same band of brothers.

Briscoe's gone undercover to infiltrate a slave-labor camp on an island in Southeast Asia, knowing full well that once he goes in, he may never get out.  Posing as a man on the run for murder, he may soon wish he had run in the opposite direction.  His adversary on the island is Schwenk-a man who is not only a connoisseur of cruelty, but an expert at delivering it.

And for Briscoe, the stakes have just shot up.  An innocent young woman has landed on the island and fallen into Schwenk's clutches, sold to him to do with her as he pleases.  Escape is the only option . . . or both Briscoe and the girl are sure to face a fate worse than death.

L. Ron Hubbard once wrote in his journal: "There must be wide spaces in which to think, strange music to hear, odd costumes to see and the elements to battle against. Money, nice cars, good food and a 'good job' mean nothing to me when compared to being able to possess the thought that there is a surprise over the horizon." Venturing toward that horizon, at age seventeen Ron set sail for the South Pacific in July 1927, and after spending time getting to know the local natives, he signed aboard a working schooner bound for China's coast. Along the way, Ron encountered many dangers lurking in the thick jungle mists-firsthand experience that contributed to stories like The Bold Dare All.

This title is due for release on June 23, 2014
We'll send you an email as soon as it is available!