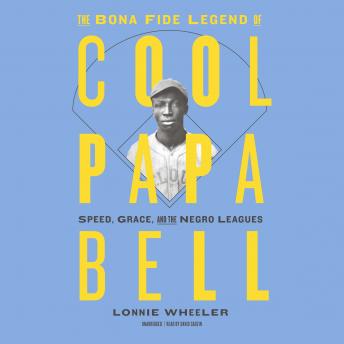 The ?rst full biography of the star Negro Leaguer and Hall of Famer

James "Cool Papa" Bell (1903-1991) was a legend in Black baseball, a lightning-fast switch hitter elected to the National Baseball Hall of Fame in 1974. Bell's speed was extraordinary; as Satchel Paige famously quipped, he was so fast he could ?ip a light switch and be in bed before the room got dark.

In The Bona Fide Legend of Cool Papa Bell, experienced baseball writer and historian Lonnie Wheeler recounts the life of this extraordinary player, a key member of some of the greatest Negro League teams in history.

Born to sharecroppers in Mississippi, Bell was part of the Great Migration, the movement of African Americans from the southern states to the northern states from 1910 through 1930. In St. Louis, baseball saved Bell from a life working in slaughterhouses. Wheeler charts Bell's ups and downs in life and in baseball, in the United States, the Dominican Republic, and Mexico, where he went to escape American racism and major league baseball's color line.

Rich in context and suffused in myth, this is a treat for fans of baseball history.