The Bond: Three Young Men Learn to Forgive and Reconnect with Their Fathers 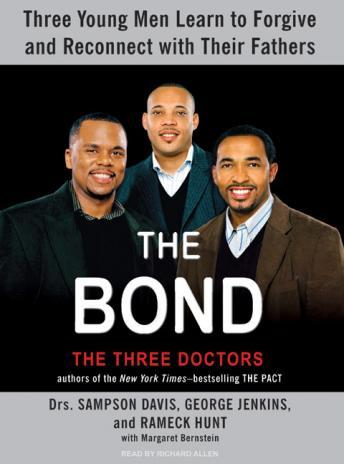 The Three Doctors-Drs. Sampson Davis, George Jenkins, and Rameck Hunt-discovered early in their friendship that they shared one disturbing trait: as children, they had to navigate life in inner-city Newark without a father's support and guidance. While each young man dealt with the turmoil caused by an absent father, with no male role model to turn to for advice, each veered dangerously close to a life of delinquency, drugs, and crime. But despite great odds, the three overcame the statistics. In high school, they formed the Pact, a promise to one another that they would become doctors, and it kept them dedicated to one another and to their dream and helped to put them on the road to successful careers as physicians.

In The Bond, the Three Doctors plumb their own tough childhoods to explore the national epidemic of fatherlessness. But rather than cling to any bitterness or pain they may have felt as children about their fathers' inability to be in their lives, as adults Davis, Jenkins, and Hunt sought out their fathers and worked to reconnect with them. In the doctors' own words-and their fathers'-they describe the crucial lessons they learned, identifying ways to stem the tide of fatherlessness that's sweeping through communities across the country. Honest, brave, and poignant, The Bond is a book for every family, every father, and every man.

Bond: Three Young Men Learn to Forgive and Reconnect with Their Fathers

This title is due for release on October 18, 2007
We'll send you an email as soon as it is available!