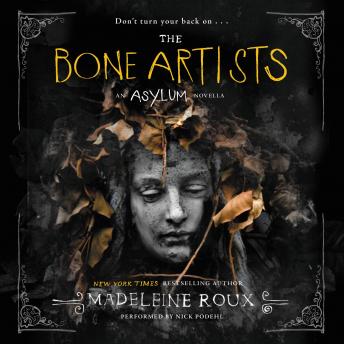 In this bone-chilling digital original story set in the world of Madeleine Roux's New York Times bestselling novel Asylum, a Louisiana teen tries to make tuition money working for a sinister organization but finds that leaving comes at a terrible cost.

When Dan, Abby, and Jordan meet Oliver in Catacomb―the third book in the Asylum series―he is a mysterious young antiques dealer with a dark past. But before he was stuck in America's most haunted city, he was a teenager with a bright future ahead of him. In this story, we find Oliver saving up to attend his dream college in the fall and leave behind his family's New Orleans antique shop for good. And if his job just happens to involve robbing graves for a group calling themselves the Bone Artists, well—money is money, and it's only for now. But Oliver soon learns that the Bone Artists don't take kindly to deserters. And there are some debts that can never be repaid.

With a mounting sense of dread that builds to a terrible end, The Bone Artists is a thrilling installment in the Asylum series that can stand on its own for new readers or provide a missing piece of the puzzle for series fans.

Epic Reads Impulse is a digital imprint with new releases each month.

The ending is a weird, cuts the story off very short.