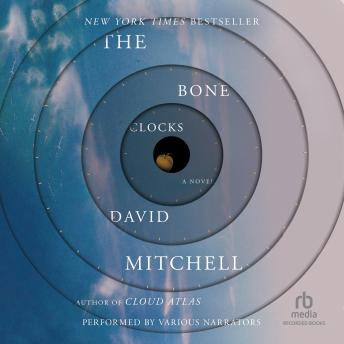 David Mitchell is an eloquent conjurer of interconnected tales, a genre-bending daredevil, and a master prose stylist. His hypnotic new novel, The Bone Clocks, crackles with invention and wit-it is fiction at its most spellbinding and memorable. Following a scalding row with her mother, fifteen-year-old Holly Sykes slams the door on her old life. But Holly is no typical teenage runaway: A sensitive child once contacted by voices she knew only as 'the radio people,' Holly is a lightning rod for psychic phenomena. Now, as she wanders deeper into the English countryside, visions and coincidences reorder her reality until they assume the aura of a nightmare brought to life. For Holly has caught the attention of a cabal of dangerous mystics-and their enemies. But her lost weekend is merely the prelude to a shocking disappearance that leaves her family irrevocably scarred. This unsolved mystery will echo through every decade of Holly's life, affecting all the people Holly loves-even the ones who are not yet born. A Cambridge scholarship boy grooming himself for wealth and influence, a conflicted father who feels alive only while reporting from occupied Iraq, a middle-aged writer mourning his exile from the bestseller list-all have a part to play in this surreal, invisible war on the margins of our world. From the medieval Swiss Alps to the nineteenth-century Australian bush, from a hotel in Shanghai to a Manhattan townhouse in the near future, their stories come together in moments of everyday grace and extraordinary wonder. Rich with character and realms of possibility, The Bone Clocks is a kaleidoscopic novel that begs to be taken apart and put back together. From the Hardcover edition.

The characters are rich. The imagery is wonderful. I love that the stories weave together. The narators do an amazing job. Unfortunately parts of the ending lost me. This book is 80% there still worth the listen or the read.

This book takes you on quite a ride. It is split up in sections with different narrators for each section. The first and last sections are from the perspective one character, the others from different characters that are related to the through-line character. It is intriguing and engaging from the onset, though it takes a few sections to grasp what is fully going on, but the mystery is well worth the journey and I had no problem waiting to find answers. I’ve noticed a few other reviews state the ending was a bit lost on them or they found it a bit unbelievable. I’ll say that if you are enjoying the journey, and are engaged and “into” the world set-up through 4 of the 6 parts of the book, you’ll dig the end. I loved it.

Great book. Amazing character development. Even though it is clearly one narrative, it feels like two stories. Great narration too.

I really enjoyed the delicate and sprawling nature of the universe in this family history.

I just could not get into the characters. The different narrators could not help either.

I thought this book was amazing, great characters a very rich and detailed story about the lives of many people and how they interact with each other. I think the author had a lot of insight into what our future just might be. The ending was a bit surreal but it could happen.

This may be the most tedious, unrewarding books of all time. An absolute waste of time!