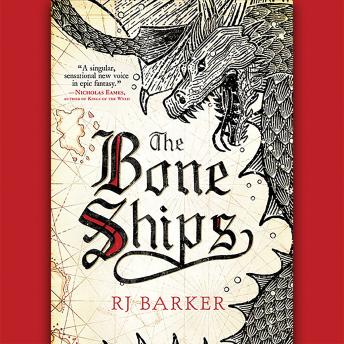 A brilliantly imagined saga of honor, glory, and warfare, The Bone Ships is the epic launch of a new fantasy from David Gemmell Award-nominated RJ Barker.
Two nations at war. One prize beyond compare.
For generations, the Hundred Isles have built their ships from the bones of ancient dragons to fight an endless war.
The dragons disappeared, but the battles for supremacy persisted.
Now the first dragon in centuries has been spotted in far-off waters, and both sides see a chance to shift the balance of power in their favour. Because whoever catches it will win not only glory, but the war.

Praise for The Bone Ships:
'A vividly realized high-seas epic that pulls you deep into its world and keeps you tangled there until the very last word.' --Evan Winter, author of The Rage of Dragons
'The Bone Ships is excellent. Aside from the standout writing, it's one of the most interesting and original fantasy worlds I've seen in years.' --Adrian Tchaikovsky, Arthur C. Clarke Award-winning author

The Tide Child TrilogyThe Bone Ships
For more from RJ Barker, check out:
The Wounded KingdomAge of AssassinsBlood of AssassinsKing of Assassins