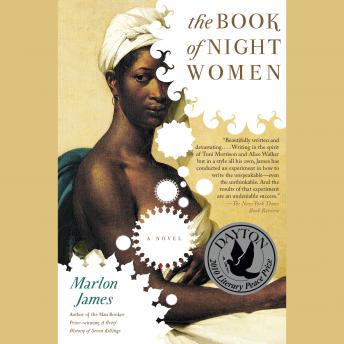 The Book of Night Women

From the author of the National Book Award finalist Black Leopard, Red Wolf and the WINNER of the 2015 Man Booker Prize for A Brief History of Seven Killings

The Book of Night Women is a sweeping, startling novel, a true tour de force of both voice and storytelling. It is the story of Lilith, born into slavery on a Jamaican sugar plantation at the end of the eighteenth century. Even at her birth, the slave women around her recognize a dark power that they—and she—will come to both revere and fear.

The Night Women, as they call themselves, have long been plotting a slave revolt, and as Lilith comes of age and reveals the extent of her power, they see her as the key to their plans. But when she begins to understand her own feelings and desires and identity, Lilith starts to push at the edges of what is imaginable for the life of a slave woman in Jamaica, and risks becoming the conspiracy’s weak link.

Lilith’s story overflows with high drama and heartbreak, and life on the plantation is rife with dangerous secrets, unspoken jealousies, inhuman violence, and very human emotion—between slave and master, between slave and overseer, and among the slaves themselves. Lilith finds herself at the heart of it all. And all of it told in one of the boldest literary voices to grace the page recently—and the secret of that voice is one of the book’s most intriguing mysteries.

I am new to audiobooks because i usually just read myself. But I must say this was Beautifully narrated and written. I initially listened to a Brief History of Seven Killings by Marlon James which i also enjoyed. I own both of the actual books but in listening it was an unforgettable experience. The voice, tone, events and all put me into that time era. Looking forward to enjoying more audiobooks.

It was a very challenging book, but well worth hanging on/persevering. The characters will be indelibly etched in my imagination; I did not want it to end. Like the author, I'm Jamaican. The book also reminded me of the forgotten family folklore about our Maroon, Indian and Scottish heritage. I should probably do a 23 and Me test to investigate this further. Looking forward to enjoying more tiles by this author.

One of the best book I have encountered on Caribbean slavery. It is raw and honest depiction of the history we are often afraid to confront. Beautiful piece of work.