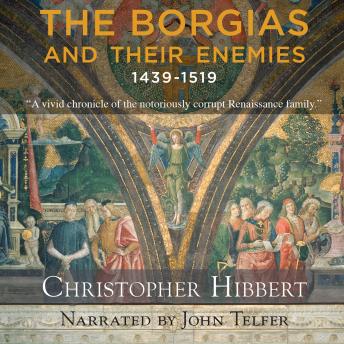 The firstmajor biography of the Borgias in thirty years, Christopher Hibbert's latesthistory brings to life the family and the world they lived in: the glittering Romeof the Italian Renaissance.
The nameBorgia is synonymous with the corruption, nepotism, and greed that were rife inRenaissance Italy. The powerful, voracious Rodrigo Borgia, better known tohistory as Pope Alexander VI, was the central figure of the dynasty. Two of hisseven papal offspring also rose to power and fame-his daughter Lucrezia and herbrother Cesare, who murdered Lucrezia's husband and served as the model forMachiavelli's The Prince. The Borgiaswere notorious for seizing power, wealth, land, and titles through bribery,marriage, and murder. The story of the family's dramatic rise from its Spanishroots to the highest position in Italian society is an absorbing tale.