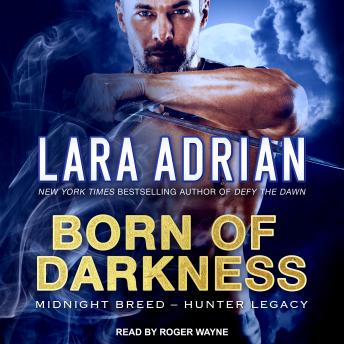 As a former assassin in the Hunter program, Asher is one of a small group of Gen One Breed vampires who survived the horrors of a madman's laboratory and the cruelty of the training that made him one of the most lethal beings in existence. Now, twenty years after his escape from those hellish origins, Asher is a loner whose heart is as cold as his skills are merciless. But when he thwarts a killing under way in the middle of the desert outside Las Vegas, Asher meets a beautiful woman who draws him into a deadly game against powerful enemies . . .

Orphaned as a child after her mother's murder, Naomi Fallon didn't survive twenty-six years on the street without using up most of her nine lives. But when her latest caper lands her in the Mojave against a Vegas gangster's henchmen, she's certain her number is up. Then he appears-immense, brutal, and far from human. Naomi's never needed anyone's help, least of all one of the Breed. But after one risk too many, only a man with Asher's skills can keep her safe. Yet the solitary, seductively handsome vampire has enemies of his own, and a secret that will not only shatter her faith in him but her heart, proving what she's feared all along-that trust is only an illusion and love may be the sharpest weapon of all.

Really good. It was kind of quick but I liked it. Vampires are created differently so that was interesting. There's a mate concept that's really interesting. There's a little bit of danger but not a lot. A lot of sex even for a short book. Asher of a Breed vampire living alone until one day he has to go to town and comes in contact with some goons trying to kill a kid. He intervenes only to find out, the kid's a female and she's also a Breed mate. Which puts her in danger. He decides to protect her no matter what. Naomi is a Breed mate but she avoids it. She's running an orphanage with her best friend and it's plotting revenge on someone who hurt her. She will not let anyone stop her, especially not Asher. I recommend

It was an interesting premise, but the characters were fairly weak. My brain pretty much shut off when they fell in love so quickly.