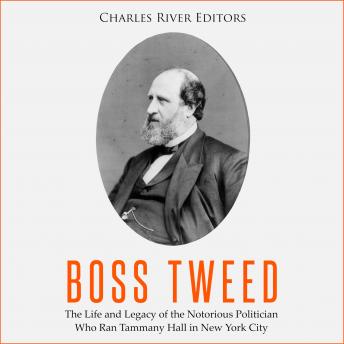 Boss Tweed: The Life and Legacy of the Notorious Politician Who Ran Tammany Hall in New York City

"I don't care who does the electing, so long as I get to do the nominating." - Boss Tweed
"It's hard not to admire the skill behind Tweed's system ... The Tweed ring at its height was an engineering marvel, strong and solid, strategically deployed to control key power points: the courts, the legislature, the treasury and the ballot box. Its frauds had a grandeur of scale and an elegance of structure: money-laundering, profit sharing and organization." - Kenneth D. Ackerman
Of all the great cities in the world, few personify their country like New York City. As America's largest city and best known immigration gateway into the country, the Big Apple represents the beauty, diversity and sheer strength of the United States, a global financial center that has enticed people chasing the "American Dream" for centuries.
However, for all the promise and opportunities America seemingly held out, and for all of the nostalgia and pride the country's history invokes among Americans today, the simple truth is many never climbed the ladder. One of the few who did was William Magear Tweed, known more widely as Boss Tweed, one of the most famous - and corrupt - politicians in American history. In the 19th century, Tweed was an influential mover and shaker for Tammany Hall, the infamous Democratic political machine in New York City and the driving force behind the party's success in the city for decades. Although Tweed never technically held a position of power in New York City's government, he essentially ran the city and its finances between 1868 and 1871 as a political boss of Tammany, and even before that, Tweed would make a name for himself among politicians as an alderman who had a penchant for figuring out how to profit from political situations. By the end of his life, people across the state commonly referred to his operation as the Tweed Ring.
While Tweed was at one point among the wealthiest men in the country during the 19th century, he would die in prison thanks to the illegal accumulation of this wealth. Over the course of his time at Tammany Hall, he would steal millions of dollars from state taxpayers, and he was known for extorting large sums of money for political favors. He was finally brought down by the media in a crusade of sorts that would set the precedent for how the press would deal with political scandals for years to come. As a contemporary writer, William R. Martin, put it in 1878, "Three casual expressions attributed to Mr. Tweed, illustrated by his brief political history, indicate his theory of administration. The first was, 'The way to have power is to take it;' the second, 'He is human;' and the third, 'What are you going to do about it?' In his career was exhibited the despotic phase of municipal administration. He got for himself and his associates offices, one after the other, by taking them with or without right, until he held the power of the State, and then fortified his position by enacting appropriate laws. His means of doing this was to approach men through their self-interests, and to buy their support by promises, offices, and money. His appreciation of this trait in the character of the men about him was expressed in his belief that they were 'human.' The arrogance of the full possession of power and the defiance against the remonstrances of honest men drove him to the extreme of audacity, 'What are you going to do about it?' which preceded his fall. There was no greater popular mistake than to call Mr. Tweed and his associates a 'ring.' They were so at the outset by the 'cohesive power of public plunder,' but, once in possession, like a crew of pirates who had gained the deck of a prize, they became arrayed against each other. If they had been a ring, their compactness of purpose might have constituted a government, but they had so little hold upon or conf

Boss Tweed: The Life and Legacy of the Notorious Politician Who Ran Tammany Hall in New York City