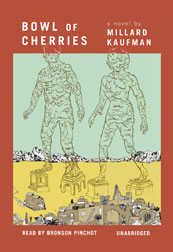 Bowl of Cherries: A Novel

Kicked out of Yale at age fourteen, the precocious Judd Breslau takes a questionable job from the eccentric Phillips Chatterton, a bathrobe-wearing Egyptologist working out of a dilapidated home laboratory. There, Judd falls for young Valerie Chatterton, who quickly leads Breslau away from his research and into, in order: the attic, a Colorado equestrian ranch, a porn studio beneath the Brooklyn Bridge, and a jail cell in southern Iraq, where we find him awaiting his own execution while the war rages on in the north.
Written by a ninety-year-old debut novelist, ex-Marine, two-time Oscar nominee, and co-creator of Mr. Magoo, Bowl of Cherries rivals the liveliest comic novels for sheer gleeful inventiveness. This is a book of astounding breadth and sharp consequence, containing all the joy, derangement, terror, and doubt of adolescence and modern times.

Bowl of Cherries: A Novel

This title is due for release on May 29, 2008
We'll send you an email as soon as it is available!