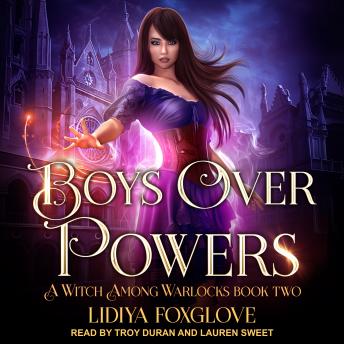 #2 of Witch Among Warlocks

They took my powers from me-for my own good, so they said-and told me not to come back to Merlin College. But you can't get rid of me that easily.

After all, I still have the boys on my side. My foxy familiar Firian, tempting incubus Alec, and sexy vampire Montague-and we have an awesome summer planned in Florida. Part of the plan? Trying to get myself enrolled in a rival witch college.

Not part of the plan? The part where Harris von Hapsburg Nicolescu, arrogant jerk that he is, follows us to Florida and gets seriously up in my business. And definitely not the part where Harris gets kidnapped and held for ransom by Montague's sire, a five hundred year old vampire who wants to steal Montague away from us forever.

So, if we can just keep out of trouble from the vampires and demons who want to steal us away to the dark side, it should be a pretty sweet year of wand-making (wand-making, y'all! #goals), necromancy, sexy times on boats, sexy times in computer games, and some very unexpected allies.