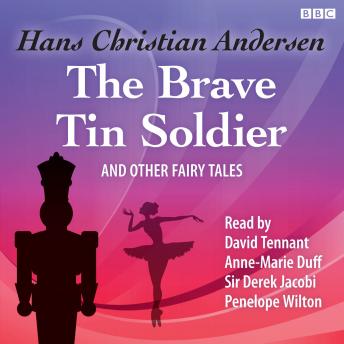 Here are four of Hans Christian Andersen's best-loved short stories, specially adapted for young children and read by some of Britain's most well-known actors. In 'The Brave Tin Soldier', read by David Tennant, a one-legged toy soldier falls in love with a paper ballerina. In 'Thumbelina', read by Anne-Marie Duff, a tiny but beautiful girl grows from a barleycorn which has been enchanted by a witch. In 'The Nightingale', read by Sir Derek Jacobi, an emperor prefers a sparkling mechanical bird to the song of a real nightingale. And in 'The Ugly Duckling', read by Penelope Wilton, a little bird is called ugly by others until he matures into a beautiful swan.

This title is due for release on August 7, 2011
We'll send you an email as soon as it is available!