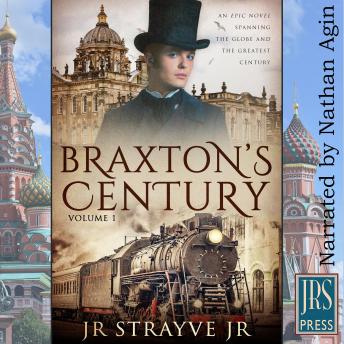 Braxton's Century: AN EPIC NOVEL SPANNING THE GLOBE AND THE GREATEST CENTURY

Follow Prince Braxton in volume 1 of this trilogy blazing a sizzling trail spanning the greatest century, 1860-1960. A century of world wars, engineering marvels, romance defying social morays, revolutions, spies, requited and unrequited love. In this historical dystopia, the author has expunged the Victorian royal family, replacing it with one worthy of reigning over the world’s most powerful empire. Seizing hold of his life, Braxton builds an economic empire throughout England, Spain, France, Germany, Austria, and Russia alongside the Industrial Revolution, murder, assassinations, and fluid sexual assignations. Dive in! Enjoy the saga, as Braxton tears through life on his own terms, crafting history’s greatest century!

Braxton's Century: AN EPIC NOVEL SPANNING THE GLOBE AND THE GREATEST CENTURY

This title is due for release on February 3, 2021
We'll send you an email as soon as it is available!