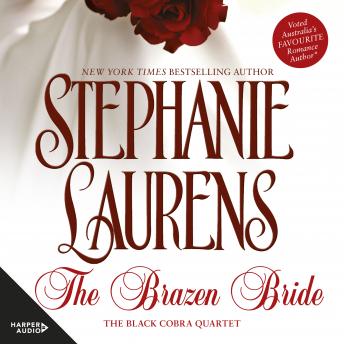 The Black Cobra series continues with another richly compelling Regency romance from NEW YORK TIMES bestselling author Stephanie Laurens.'A fabulously entertaining new quartet.' BOOKLIST
Four officers of the Crown, aided by Bastion Club members and Cynsters alike, fight to bring down a dangerous enemy - and to win the loves of their lives.Logan Monteith's mission got off to a shaky start. Wounded in battle, he jumped from his ship rather than risk losing the evidence that would bring down a traitor.As he recuperates in a tiny village, he finds his respect for the villagers grows - as does his fascination with his rescuer, Linnet trevission. Unwilling to risk putting the village in greater danger by remaining, but unable to travel on his own, Logan reluctantly accepts Linnet's offer of help.Linnet's strength and wisdom have made her a respected leader at home. that's why she knows she'll be invaluable to Logan - if only he'll let her in. Linnet has no doubt that Logan is the man for her. Her only battle now is convincing him that the connection they feel is real and everlasting - before it's too late.Praise for the Black Cobra Quartet:'Fabulously entertaining' Booklist'Another incredible series connected to the Cynsters and Bastion Club' Romantic times