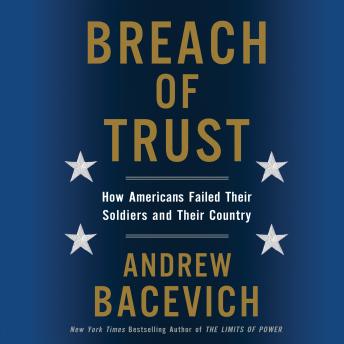 Breach of Trust: How Americans Failed Their Soldiers and Their Country

A blistering critique of the gulf between America's soldiers and the society that sends them off to war, from the bestselling author of The Limits of Power and Washington Rules
The United States has been 'at war' in Iraq and Afghanistan for more than a decade. Yet as war has become normalized, a yawning gap has opened between America's soldiers and veterans and the society in whose name they fight. For ordinary citizens, as former secretary of defense Robert Gates has acknowledged, armed conflict has become an 'abstraction' and military service 'something for other people to do.'
In Breach of Trust, bestselling author Andrew J. Bacevich takes stock of the separation between Americans and their military, tracing its origins to the Vietnam era and exploring its pernicious implications: a nation with an abiding appetite for war waged at enormous expense by a standing army demonstrably unable to achieve victory. Among the collateral casualties are values once considered central to democratic practice, including the principle that responsibility for defending the country should rest with its citizens.
Citing figures as diverse as the martyr-theologian Dietrich Bonhoeffer and the marine-turned-anti-warrior Smedley Butler, Breach of Trust summons Americans to restore that principle. Rather than something for 'other people' to do, national defense should become the business of 'we the people.' Should Americans refuse to shoulder this responsibility, Bacevich warns, the prospect of endless war, waged by a 'foreign legion' of professionals and contractor-mercenaries, beckons. So too does bankruptcy-moral as well as fiscal.

Breach of Trust: How Americans Failed Their Soldiers and Their Country