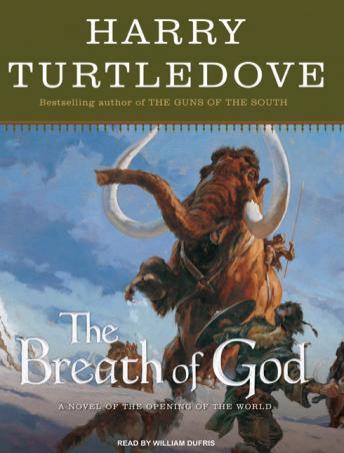 The Breath of God: A Novel of the Opening of the World

Once the great Glacier enclosed the Raumsdalian Empire. Now it has broken open, and Count Hamnet Thyssen faces a new world. With the wisecracking Ulric Skakki, the neighboring clan leader Trasamund (politely addressed as 'Your Ferocity'), and his lover, the shaman Liv, Hamnet leads an exploration of the new territory in hopes of finding the legendary Golden Shrine.

But dangers abound. A violent and implacable group known as the Rulers has already killed many, and now they attack again. Riding deer and woolly mammoths and using powerful magic, the Rulers triumph and force the Raumsdalians to flee.

In the spring, another battle ends even more badly for Hamnet's side, but the Glacier is also retreating, so they are able to escape. Meeting a tribe whose desperate living conditions have led them to overcome the Raumsdalian taboo against eating fallen foes, they find unexpected allies. Now, returning to the capital city and its intrigues, Hamnet prepares to lead an army against the merciless Rulers. The world, once so bounded and comprehensible, will never be the same.

Breath of God: A Novel of the Opening of the World