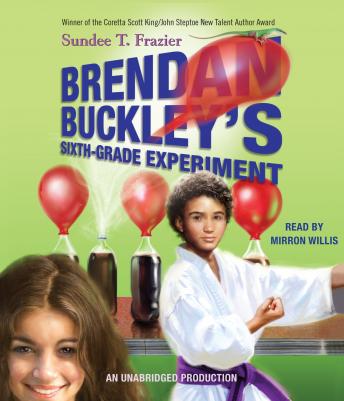 Read about Brendan, a biracial boy who loves science, and his middle school adventures in this sequel to the Coretta Scott King/John Steptoe New Talent Author Award-winner Brendan Buckley’s Universe and Everything in It.

Brendan Buckley is headed to middle school on a whole new adventure. When his alternative energy idea gets him paired with new girl Morgan Belcher for the national science competition, Brendan is skeptical. But their partnership clicks, and they embark on a methane-producing experiment involving bottles, balloons, and the freshest cow manure they can find.
As Brendan spends more time on the experiment, he has a lot of big questions: Does his police detective dad really think he’s a science-nerd whimp? Will he and Khalfani, his best friend and Tae Kwon Do sparring partner, remain best friends? And can Brendan prove that his scientific pursuits really could be world-changing?

*Brendan is both nerdy and immensely likable. . . . The prickliness between Brendan and his father is handled with particular deftness.”—The Bulletin of the Center for Children’s Books, Recommended

“Children will enjoy the ups and downs of Brendan’s sixth-grade year and wait eagerly for his future exploits.”—School Library Journal

“The complexity of the characters and the strength of Brendan’s family sets the book apart, as does Brendan’s biracial identity.”—Booklist