Brendan Buckley's Universe and Everything in It 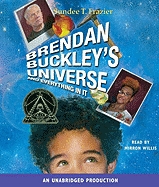 Winner of the Coretta Scott King / John Steptoe New Talent Award, this acclaimed, multicultural book about a biracial boy with a passion for science will resonate with children everywhere who can’t—or won’t—be defined by categories.

Ten-year-old Brendan Buckley is a self-declared scientist: asking questions and looking for answers, but most of all struggling against the overprotective behavior of his parents. Up until now, he has never even met his grandfather—the grandfather his mother won’t even speak of.

A chance encounter brings Brendan and his grandfather together where Brendan initiates a relationship with estranged grandfather, Ed DeBose. While they share a passion for geology, they do not share the color of their skin; Brendan’s skin is brown, not pink like Ed DeBose’s. Pretty soon, Brendan sets out to uncover the reason behind Ed’s absence but soon discovers that family secrets can’t be explained by science.

A winner of the Coretta Scott King/John Steptoe New Talent Author Award, this is a novel about a boy learning about race relations and what it means to be a family.

'Brendan is an appealing character with a sense of honor. . . . A good, accessible selection to inspire discussion of racism and prejudice.' —Kirkus Reviews

'Frazier delivers her messages without using an overly heavy hand. Brendan is a real kid with a passion for science and also a willingness to push his parents' rules.' —Booklist

Brendan Buckley's Universe and Everything in It