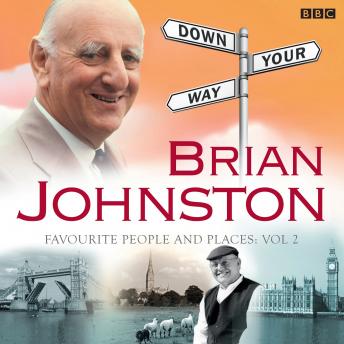 Brian Johnston Down Your Way: Favourite People And Places Vol. 2

Down Your Way was one of the most popular programmes on BBC Radio from 1946 until 1992. Every week the presenter would visit a different city, town or village in the UK and interview six local people about its history, traditions and customs. Brian Johnston presented the series for fifteen years and for this recording, his son Barry has selected more of the fascinating people and places that his father visited on his travels. Brian meets famous people such as the former England footballer Nat Lofthouse, Australian cricket legend Sir Donald Bradman, and steeplejack and TV personality Fred Dibnah, as well as marvellous local characters, including the British snuff champion, a lady gurning champion, and a Scottish sheep shearer. He also takes a boat trip down the River Thames, visits Tower Bridge and Abbey Road studios, and goes to Salisbury Cathedral and Wigan Pier. This delightful recording illustrates the rich and colourful heritage of the people and places of Great Britain.

Brian Johnston Down Your Way: Favourite People And Places Vol. 2

This title is due for release on August 8, 2011
We'll send you an email as soon as it is available!