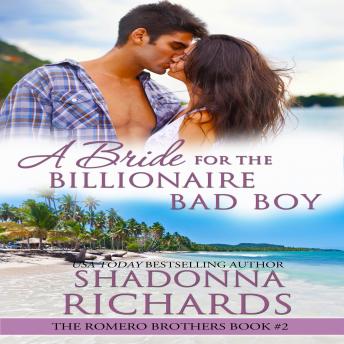 A Bride for the Billionaire Bad Boy (The Romero Brothers, Book 2)

Praise for the Romero Brothers" Anyone who has read Shadonna's series on the Romero family knows the guys are all super hot, successful, and upstanding citizens, even if rather commitment phobic." - 5 STARS (Amz) Reader Review"I love this author. I love the series too. Definitely romance at its best. These guys are a woman's dream come true. Too bad they really don't exist, but it's still nice to dream. That's why I read." - 5-stars (AMZ) Reader Review *. *. *. She needs security...When Maxine Summers took over Dream Weddings, Inc., her friend's former business, she had no idea what a nightmare she would have. It is believed a past disgruntled client is making attempts on her life and she can no longer return to her apartment. Feeling alone, Maxine has nowhere to turn-until the sexy, notorious bachelor, Lucas Romero, offers her a proposition. Her heart says yes, but her mind is saying "no way!"

Scandal-ridden billionaire, Lucas Romero, knows his reputation with women could cost him everything he's worked for. He previously met Maxine when she helped plan his grandfather's remarriage, a fifth one at that, so when Lucas discovers she needs protection, he is all too willing to help. Except, falling in love was never a part of the arrangement.

Will Maxine be the one to tame his bad boy ways?

Bride for the Billionaire Bad Boy (The Romero Brothers, Book 2)