The Bride of Doctor Franklin Stein 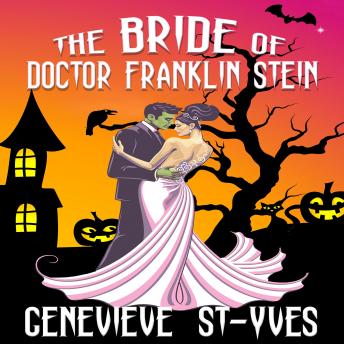 Love is hard when you're green
Doctor Franklin Stein's love life has been in a rut ever since he fell into a vat of the experimental dye he created. Now he's green from head to toe. Unable to go out in public without causing a stir, Franklin spends his days and nights working in his lab to reverse his condition. After all, what woman would want a green husband? But when the reclusive scientist receives an invitation to a Halloween party, it's a chance to go out on the town and be treated like a normal man.
Becky Jensen became an internet sensation after a video of her being left at the altar went viral and holds little hope of ever finding Mr. Right. Socially awkward and more than a little afraid of being recognized as the infamous Crying Bride, Becky finds herself drawn to the man in the Jolly Green Giant costume. She strikes up a conversation hoping to hit it off with a fellow wallflower. With a few corny puns and a flaming pumpkin, Franklin charms Becky. But when two people are keeping secrets from each other, can the bond between them survive beyond one magical Halloween night? Or does Becky have what it takes to accept Franklin, green skin and all, and become the Bride of Doctor Franklin Stein?
A sweet Halloween novella that's more treats than tricks.

This title is due for release on October 2, 2019
We'll send you an email as soon as it is available!