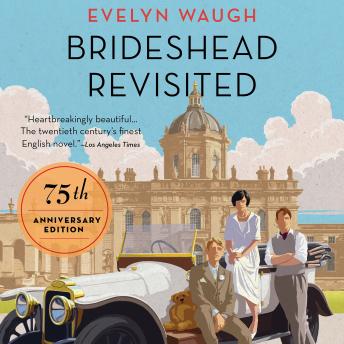 Selected by Modern Library as one of the 100 best novels of the century and called "Evelyn Waugh's finest achievement" by the New York Times, Brideshead Revisited is a stunning exploration of desire, duty, and memory. Read by Jeremy Irons, star of the acclaimed 1981 television series based on the novel.  The wellsprings of desire and the impediments to love come brilliantly into focus in Evelyn Waugh's masterpiece -- a novel that immerses us in the glittering and seductive world of English aristocracy in the waning days of the empire. Through the story of Charles Ryder's entanglement with the Flytes, a great Catholic family, Evelyn Waugh charts the passing of the privileged world he knew in his own youth and vividly recalls the sensuous pleasures denied him by wartime austerities. At once romantic, sensuous, comic, and somber, Brideshead Revisited transcends Waugh's early satiric explorations and reveals him to be an elegiac, lyrical novelist of the utmost feeling and lucidity. "A genuine literary masterpiece." --Time "Heartbreakingly beautiful...The twentieth century's finest English novel." --Los Angeles Times

The narrator was perfect for this book. He nailed all the characters and had such a pleasing ring to his voice. I cannot fathom how he came up with all the accents and intonations. I plan to search for other novels that he has narrated. The book is a classic with so much rich detail. Such a melancholy theme. I loved it but be sure to be ready for a deep moving novel, not a joy ride.

Been on my reading list for quite some time and being a fan of British literature I enjoyed the imagery, the well drawn characters, the easy pace of the storyline.