The Bridge: The Life and Rise of Barack Obama 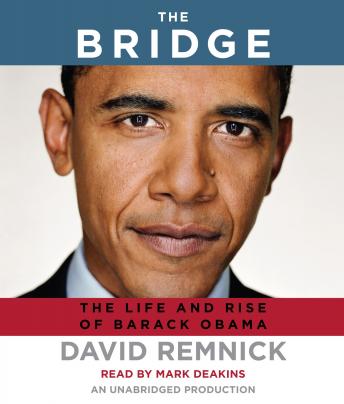 No story has been more central to America’s history this century than the rise of Barack Obama, and until now, no journalist or historian has written a book that fully investigates the circumstances and experiences of Obama’s life or explores the ambition behind his rise. Those familiar with Obama’s own best-selling memoir or his campaign speeches know the touchstones and details that he chooses to emphasize, but now—from a writer whose gift for illuminating the historical significance of unfolding events is without peer—we have a portrait, at once masterly and fresh, nuanced and unexpected, of a young man in search of himself, and of a rising politician determined to become the first African-American president.

The Bridge offers the most complete account yet of Obama’s tragic father, a brilliant economist who abandoned his family and ended his life as a beaten man; of his mother, Stanley Ann Dunham, who had a child as a teenager and then built her career as an anthropologist living and studying in Indonesia; and of the succession of elite institutions that first exposed Obama to the social tensions and intellectual currents that would force him to imagine and fashion an identity for himself. Through extensive on-the-record interviews with friends and teachers, mentors and disparagers, family members and Obama himself, David Remnick allows us to see how a rootless, unaccomplished, and confused young man created himself first as a community organizer in Chicago, an experience that would not only shape his urge to work in politics but give him a home and a community, and that would propel him to Harvard Law School, where his sense of a greater mission emerged.

Deftly setting Obama’s political career against the galvanizing intersection of race and politics in Chicago’s history, Remnick shows us how that city’s complex racial legacy would make Obama’s forays into politics a source of controversy and bare-knuckle tactics: his clashes with older black politicians in the Illinois State Senate, his disastrous decision to challenge the former Black Panther Bobby Rush for Congress in 2000, the sex scandals that would decimate his more experienced opponents in the 2004 Senate race, and the story—from both sides—of his confrontation with his former pastor, Jeremiah Wright. By looking at Obama’s political rise through the prism of our racial history, Remnick gives us the conflicting agendas of black politicians: the dilemmas of men like Jesse Jackson, John Lewis, and Joseph Lowery, heroes of the civil rights movement, who are forced to reassess old loyalties and understand the priorities of a new generation of African-American leaders.

The Bridge revisits the American drama of race, from slavery to civil rights, and makes clear how Obama’s quest is not just his own but is emblematic of a nation where destiny is defined by individuals keen to imagine a future that is different from the reality of their current lives.

Bridge: The Life and Rise of Barack Obama