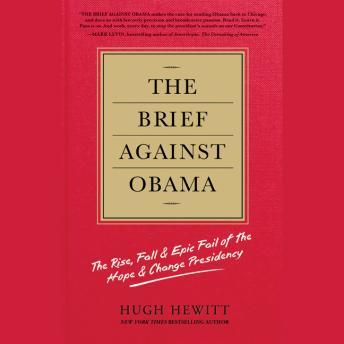 The Brief Against Obama: The Rise, Fall & Epic Fail of the Hope & Change Presidency

Voters can do nothing until they have the facts

the hard, cold, true facts, and that is what Hugh Hewitt provides in THE BRIEF AGAINST OBAMA: The Rise, Fall & Epic Fail of the Hope & Change Presidency. Hugh makes the case that Obama's has been a disastrous presidency, a fiasco in fact, and reveals the president to be a wholly unprepared and incapable-of-learning ideologue whose nearly every move has been wrong, and whose almost every decision has been ill-conceived and poorly executed. But for the SEALs' dispatch of bin Laden and the military's removal of al-Awalki and other terrorists

Obama would be wholly without anything to claim as an achievement of his time in the Oval Office.

In addition to the monumental failures of Obamacare, the soaring unemployment rate, the 2009 'stimulus' and the massive debt, Hugh Hewitt examines the scores and scores of broken promises and fraudulent forecasts, dozens of dodges and hundreds of disastrous innovations that President Obama has inflicted on America. It has been a reign of incompetency not before seen in the country

ever. According to Hewitt, President Obama is not just a failed president, but the most spectacularly failed president of modern times, and Hewitt's precise and lawyerly indictment is made to help the American people see what has happened, and what desperately needs to be done in the upcoming election.

The path for the American people is clear and urgent: Barack Obama mustn't be allowed to run the country into the ground as the Commander-in-Chief for four more years.

Brief Against Obama: The Rise, Fall & Epic Fail of the Hope & Change Presidency