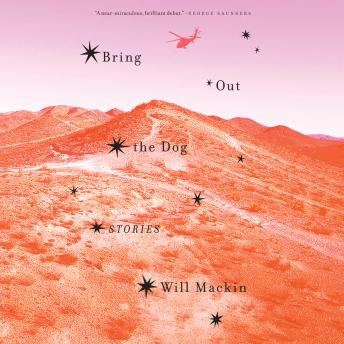 Bring Out the Dog: Stories

Written By: Will Mackin

Narrated By: Will Mackin

“In one exquisitely crafted story after the next, Will Mackin maps the surreal psychological terrain of soldiers in a perpetual war.”—Phil Klay, National Book Award–winning author of Redeployment

The eleven stories in Will Mackin’s mesmerizing debut collection draw from his many deployments with a special operations task force in Iraq and Afghanistan. They began as notes he jotted on the inside of his forearm in grease pencil and, later, as bullet points on the torn-off flap of an MRE kit. Whenever possible he incorporated those notes into his journals. Years later, he used those journals to write this book.

Together, the stories in Bring Out the Dog offer a remarkable portrait of the absurdity and poetry that define life in the most elite, clandestine circles of modern warfare. It is a world of intense bonds, ancient credos, and surprising compassion—of success, failure, and their elusive definitions. Moving between settings at home and abroad, in vivid language that reflects the wonder and discontent of war, Mackin draws the reader into a series of surreal, unsettling, and deeply human episodes: In “Crossing the River No Name,” a close call suggests that miracles do exist, even if they are in brutally short supply; in “Great Circle Route Westward Through Perpetual Night,” the death of the team’s beloved dog plunges them into a different kind of grief; in “Kattekoppen,” a man struggles to reconcile his commitments as a father and his commitments as a soldier; and in “Baker’s Strong Point,” a man whose job it is to pull things together struggles with a loss of control.

Told without a trace of false bravado and with a keen, Barry Hannah–like sense of the absurd, Bring Out the Dog manages to capture the tragedy and heroism, the degradation and exultation, in the smallest details of war.

Praise for Bring Out the Dog

“Cuts through all the shiny and hyped-up rhetoric of wartime, and aggressively and masterfully draws a picture of the brutal, frightening, and even boring moments of deployment. . . . The Things They Carried, Redeployment, and now Bring Out the Dog: war stories for your bookshelf that will last a very long time, and serve as reminders of what America was, is, and can still become.”—Chicago Review of Books

Bring Out the Dog: Stories