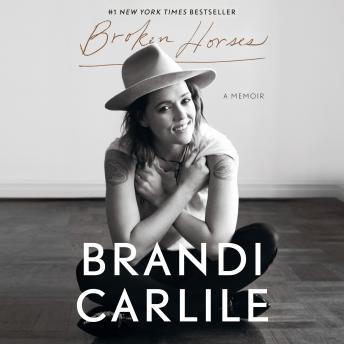 Brandi Carlile was born into a musically gifted, impoverished family on the outskirts of Seattle and grew up in a constant state of change, moving from house to house, trailer to trailer, fourteen times in as many years. Though imperfect in every way, her dysfunctional childhood was as beautiful as it was strange, and as nurturing as it was difficult. At the age of five, Brandi contracted bacterial meningitis, which almost took her life, leaving an indelible mark on her formative years and altering her journey into young adulthood.

As an openly gay teenager, Brandi grappled with the tension between her sexuality and her faith when her pastor publicly refused to baptize her on the day of the ceremony. Shockingly, her small town rallied around Brandi in support and set her on a path to salvation where the rest of the misfits and rejects find it: through twisted, joyful, weird, and wonderful music.

In Broken Horses, Brandi Carlile takes readers through the events of her life that shaped her very raw art—from her start at a local singing competition where she performed Elton John’s “Honky Cat” in a bedazzled white polyester suit, to her first break opening for Dave Matthews Band, to many sleepless tours over fifteen years and six studio albums, all while raising two children with her wife, Catherine Shepherd. This hard-won success led her to collaborations with personal heroes like Elton John, Dolly Parton, Mavis Staples, Pearl Jam, Tanya Tucker, and Joni Mitchell, as well as her peers in the supergroup The Highwomen, and ultimately to the Grammy stage, where she converted millions of viewers into instant fans.

Evocative and piercingly honest, Broken Horses is at once an examination of faith through the eyes of a person rejected by the church’s basic tenets and a meditation on the moments and lyrics that have shaped the life of a creative mind, a brilliant artist, and a genuine empath on a mission to give back.

Carlile recorded new stripped-down, solo renditions of more than 30 of the songs featured in the book, including her own and songs from artists who’ve inspired her, from Dolly Parton to Elton John, Leonard Cohen and more, available exclusively on the audiobook:

Brandie Carlile is articulate and real in writing and narrating her memoir. I felt like she was sitting in the room speaking directly to me in a warmhearted delivery of her life. Her relationships with other composers and musicians added depth to her story along with her singing a multitude of her work. A truly blessed person.

Brandi is the most real down to earth celebrity in a world full of super inflated egos and bs. Her memoir will make you a fan even if you have never heard her amazing voice. This is one very special book.

Truly wonderful. And the bonus unplugged album was over the top. Thank you Brandi!!

This is one of the best audiobook versions of a book I’ve ever heard. Having Brandi Carlile sing songs at the end of each chapter relevant to that chapter made for such a moving experience. And having her narrate her story made it all the more personal. Very well done.

She's just so damn interesting. Love that she knew her dream from when she was young, but - unlike me - got the perfect education and experiences to make it a reality. A very cool story told by a earnest and intelligent soul.

Awesome book. Candid, honest, real, inspiring. Loved having the music as a part of the story!!

I am late to the party, having only discovered her and her music within the past few months. It has been an exciting and emotional ride going through her albums and now hearing the stories behind the songs. She comes across as very down to earth, likable and approachable. You will laugh, cry and learn from listening to her life story. Some of my favorite parts of the book are where she describes her friendships with Elton John and Joni Mitchell. A unique characteristic of the audiobook is that when she is through reading a chapter, she will play acoustic versions of songs she talked about. If you are even just a casual fan, I really think you will enjoy listening to this. Also, the audiobook itself is really only about 8 1/2 hours. The rest of the time at the end is the same acoustic versions of songs repeated chronologically.

I loved this book, such an easy read and the music was an added bonus.

I loved that Brandi read the memoir herself and sang songs at the end of every chapter! What a treat! Her story is told with such honesty and she’s wonderfully down to earth. I felt like I was sitting with an old friend listening to stories..... I highly recommend this book.

Omg I LOVED this book. It puts so many of her songs into context. Thank you Brandi!

Lovely memoir, especially if you have been a fan of Brandi for many years to see how hard she worked to get where she is now. I first saw Brandi in the early 2000s as an opening act when it was just her acoustic and have seen her with her band on two additional occasions as an opening act long before they were nominated or won a Grammy. This audiobook goes into detail to explain many of her or the twins stories that led to the song lyrics from the multiple albums they have had. This audiobook is even more special that it is narrated by Brandi and after discussing the background stories to the song lyrics, she sings many of the songs, which is an additional bonus to this audiobook.

Deeply moving life story by a woman very gifted in musical story telling of a complex, painful journey to find a place of wholeness and peace as a lesbian.