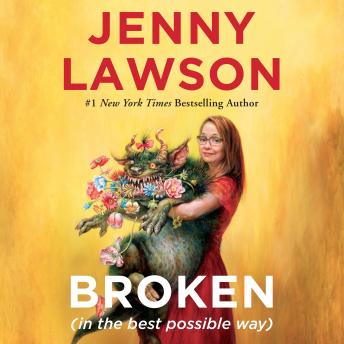 Broken (in the best possible way)

'Jenny Lawson returns to narrate her third installment in a disheveled saga of finding the light at the end of a long, winding, ludicrous tunnel...Another treasure in the Lawson collection, this audiobook shines with a powerful message: Depression and anxiety suck, but we can rise above them.' -- AudioFile Magazine, Earphones Award winner

From the #1 New York Times bestselling author of Furiously Happy and Let’s Pretend This Never Happened comes a deeply relatable audiobook filled with humor and honesty about depression and anxiety.

As Jenny Lawson’s hundreds of thousands of fans know, she suffers from depression. In Broken (in the bests possible way), Jenny brings listeners along on her mental and physical health journey, offering heartbreaking and hilarious anecdotes along the way.

With people experiencing anxiety and depression now more than ever, Jenny humanizes what we all face in an all-too-real way, reassuring us that we’re not alone and making us laugh while doing it. From the business ideas that she wants to pitch to Shark Tank to the reason why Jenny can never go back to the post office, Broken leaves nothing to the imagination in the most satisfying way. And of course, Jenny’s long-suffering husband Victor—the Ricky to Jenny’s Lucille Ball—is present throughout.

A treat for Jenny Lawson’s already existing fans, and destined to convert new ones, Broken is a beacon of hope and a wellspring of laughter when we all need it most.

I had been wanting to get a book that would be funny and Man!! this one didn’t disappoint. Jenny delivers such funny stories, thoughts and sprinkles nice heart to heart moments throughout the book. I personally didn’t like her first chapter and was worried that the point throughout the whole book would be: Look how annoying my husband thinks I am (I haven’t read her prior books). But I am so glad I have the next chapters a shot. I would catch myself laughing out loud in public. Will definitely recommend this book to others. And definitely recommend it to you

Jenny’s audiobooks are my happy place! She gives such a sweet, kind, strange, and wonderful voice to some of the biggest struggles of mental health and hearing her stories IN her voice is a truly lovely experience.

I love Jenny's candidness & how spell check fucks with her. I've read all her books but listening to her in her own word is Awesomeness. What a wonderful mind to wonder about.