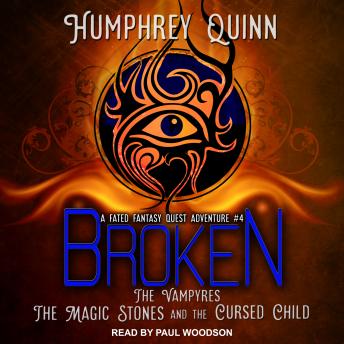 Broken: The Vampires, The Magic Stones, and The Cursed Child

#4 of A Fated Fantasy Quest Adventure

After fleeing from the Goblin King, the Svoda step through a new magical portal only to make a gruesome discovery: a devastated and smoldering habitat with belongings strewn about and ruined. Just one thing is missing . . . the people.

An investigation commences and the Svoda are on high alert. With each new mystery they uncover, the more dangerous the situation becomes, and they find themselves
fugitives with no place to run from a dark magic too powerful to stop.

Tensions heighten between Meghan and Colin when she discovers that her brother's dream girl, Catrina, may just be the key to ending this new dark power. She might even be the very threat causing it!

Meghan must make a choice in which either way, something is lost.

At risk is the life of her brother, her blood, someone she's always looked after and protected no matter what. But even if she saves him, he might be lost to her anyway, as she'll be destroying the dream girl he's fought so hard to find and would even die for.

But if she does nothing and lets him go, she might be putting the rest of the magical world, and the non-magical world, up against an ancient dark magic they cannot fight against and win.