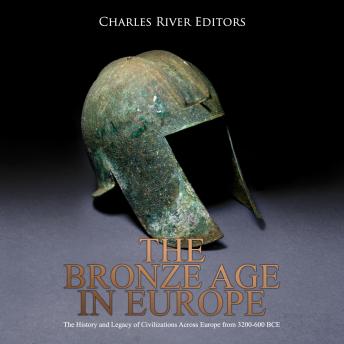 The Bronze Age in Europe: The History and Legacy of Civilizations Across Europe from 3200-600 BCE

While the Bronze Age is recognized as one of history's most important phases, it's been hard for historians to precisely date. The idea of the Bronze Age comes from a three-age system developed in the 19th century through which archaeologists and historians believe cultures evolve. These three ages are the Stone Age, the Bronze Age, and the Iron Age, and the concept of the system stems from the simultaneous development of museums in Europe during that time. In the Royal Museum of Nordic Antiquities in Denmark, Christian Jürgensen Thomsen, the director of the museum, began classifying objects of stone, bronze, or iron to better categorize and exhibit them. Each archaeological artifact was thus sorted according to their materials and further organized by shape and style. Through such methodology, working alongside archaeological reports, he was able to show how certain objects changed over time (Fagan 1996, 712).
Such a typology, combined with stratigraphy noted in archaeological reports, was useful to early archaeologists with no reliable method for dating artifacts. By understanding which object came before or after, early archaeologists had a relative dating system with which to assess the age of an object or culture. This kind of system was useful to the archaeologists who often encountered objects from above-ground burials that lacked stratigraphy.
When this three-age system reached England, John Lubbock expanded on it by applying cultural anthropology to the ages. Over time, other researchers would gradually add their interpretations to the system, with many arguing for sub-divisions of the Stone Age or the introduction of a Copper Age between the Neolithic and the Bronze Ages (Rowley-Conwy 2007, 243).
The classification system was meant as a way for modern scientists to classify and understand prehistoric cultures, the final stage of which was the Iron Age, which ended when a culture developed the ability to record their history. Of course, given the rate of each culture's development, this means that when the historical period begins is not uniform or even universal. For example, Native Americans of the Great Plains had not yet developed a written record when they first encountered Europeans. Likewise, they did not have access to the raw materials to enter the Bronze Age or Iron Age, whereas in other cases, such as in Europe, cultures entered the historical period through the conquests of the Roman Empire (which had developed writing), regardless of whether the conquered cultures had previously reached a Bronze or Iron Age. Meanwhile, the cultures not conquered by the Romans, such as those in Northern Germany and Scandinavia, continued to develop an Iron Age and eventually, a historical age, with the introduction of writing by the Vikings.
While the simplified, three-age system and typology worked for Thomsen and archaeologists in Denmark, the application of such a system could not be applied on a broader scale due to the numerous variables faced by each developing civilization (Rowley-Conwy 2007). Therefore, rather than examining a wide-ranging Bronze Age in Europe in general, individual cultures and civilizations must be examined on their own, starting with the earliest civilizations to begin mastering the techniques of bronze-making. With that said, certain generalities can be made regarding life before the Bronze Age.
The Bronze Age in Europe: The History and Legacy of Civilizations Across Europe from 3200-600 BCE looks at the different cultures that emerged over those crucial years. Along with pictures depicting important people, places, and events, you will learn about the Bronze Age in Europe like never before.

Bronze Age in Europe: The History and Legacy of Civilizations Across Europe from 3200-600 BCE