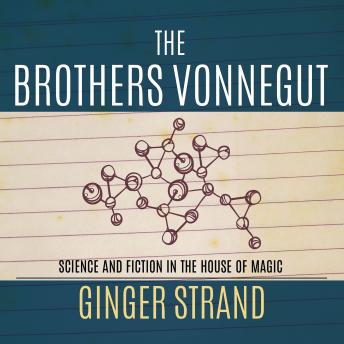 The Brothers Vonnegut: Science and Fiction of the House of Magic

Worlds collide in this true story of weather control in the cold war era and the making of Kurt Vonnegut. In the mid-1950s, Kurt Vonnegut takes a job in the PR department at General Electric in Schenectady, where his older brother, Bernard, is a leading scientist in its research lab or House of Magic. Kurt has ambitions as a novelist, and Bernard is working on a series of cutting-edge weather-control experiments meant to make deserts bloom and farmers flourish. While Kurt writes zippy press releases, Bernard builds silver-iodide generators and attacks clouds with dry ice. His experiments attract the attention of the government; weather proved and decisive factor in World War II, and if the military can control the clouds, fog, and snow, they can fly more bombing missions. Maybe weather will even be – as a headline in America Magazine calls it. The New Super Weapon. But when the army takes charge of his cloudseeding project (dubbed Project Cirrus), Bernard begins to have misgivings about the use of his inventions for harm, not to mention the evidence that they are causing alarming changes in the atmosphere. In a fascinating cultural history, Ginger Strand chronicles the intersection of these brothers' lives at a time when the possibilities of science seemed infinite. As the Cold War looms, Bernards struggle for integrity plays out in Kurts evolving writing style. The Brothers Vonnegut reveals how science ability to influence the natural world also influenced one of out most incentive novelists.

Brothers Vonnegut: Science and Fiction of the House of Magic