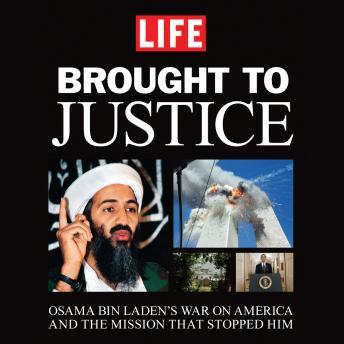 Brought to Justice: Osama Bin Laden's War on America and the Mission that Stopped Him

May 2, 2011 marked the completion of a mission that had begun even before the devastating day of September 11, 2001. Brought to Justice is a riveting, dramatic, informed and sometimes surprising illustrated portrait of Osama bin Laden and America's efforts to find him and track him down.

At pivotal moments in world events, readers have long looked to Life to tell the story. In Brought to Justice, the editors have sought out the best and most distinctive and revealing photographs - including rarities - from the Department of Defense and the White Houses official photographer Pete Souza, among many others. There are also pictures from bin Laden family albums, and many from inside the secretive world of al-Qaeda.

The editors of Life have researched bin Laden's life story and provide context (and, more important, truth) to his strange, twisting biography. In these pages, you will come to know, if not necessarily understand, Osama bin Laden: his rage, his insecurity, his narcissism and his deep well of hatred.

Brought to Justice: Osama Bin Laden's War on America and the Mission that Stopped Him