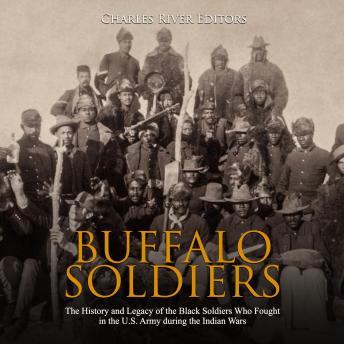 Buffalo Soldiers: The History and Legacy of the Black Soldiers Who Fought in the U.S. Army during the Indian Wars

During the Civil War, over 180,000 black men fought in volunteer units as part of the United States Colored Troop (USCT), but it was only after the end of it that they were allowed to enlist in the Regular Army. They did so in four segregated regiments, and they colloquially became known as Buffalo Soldiers. The evolution of these black units followed the course of the organization of the peacetime Regular Army. With the end of the Civil War came the demobilization of the millions of men who had volunteered to fight on behalf of the Union, including the USCT, which disbanded in late 1865. The first draft of a bill setting the organization of the Army sent to the House on March 7, 1866 called for the establishment of eight infantry regiments to be staffed by veterans of the USCT, but the legislation lacked similar provisions for black cavalry units. When the bill got to the Senate for approval, Senator Benjamin Wade succeeded in having a provision added that authorized black cavalry units.

Of course, these units are now known for the nickname attached to them, but exactly where the nickname Buffalo Soldiers came from is a subject of some dispute. Dr. Walter Hill wrote, “According to Benjamin H. Grierson, Colonel, 10th Cavalry, 1867 to 1890, the 10th acquired the name ‘Buffalo Soldiers’ during the 1871 campaign against the Comanches in the Indian Territory. Grierson said that the Comanches respected the soldiers' tireless marching and dogged trail skills. They had earned the name of the rugged and revered buffalo. The 10th made the ‘Buffalo’ its regimental coat of arms years later, but the term ‘Buffalo Soldiers,’ became synonymous with both the 9th and 10th units.” The term appeared in public for the first time in 1873, in reference to the 10th Cavalry, in a letter from Mrs. Frances M.A. Roe to a popular magazine.

Buffalo Soldiers: The History and Legacy of the Black Soldiers Who Fought in the U.S. Army during the Indian Wars

This title is due for release on December 27, 2019
We'll send you an email as soon as it is available!