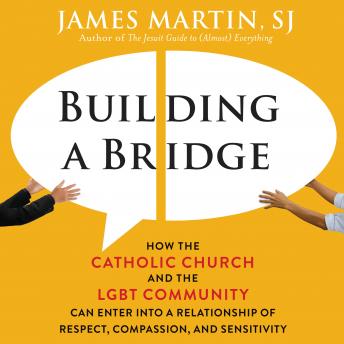 Building a Bridge: How the Catholic Church and the LGBT Community Can Enter into a Relationship of Respect, Compassion, and Sensitivity

The New York Times bestselling author of The Jesuit Guide to (Almost) Everything and Jesus: A Pilgrimage turns his attention to the relationship between LGBT Catholics and the Church in this loving, inclusive, and revolutionary book.
On the day after the Orlando nightclub shooting, James Martin S.J. posted a video on Facebook in which he called for solidarity with our LGBT brothers and sisters. 'The largest mass shooting in US history took place at a gay club and the LGBT community has been profoundly affected,' he began. He then implored his fellow Catholics-and people everywhere-to 'stand not only with the people of Orlando but also with their LGBT brothers and sisters.' A powerful call for tolerance, acceptance, and support-and a reminder of Jesus' message for us to love one another-Father Martin's post went viral and was viewed more than 1.6 million times.
Now, Martin expands on his reflections in this moving and inspiring book, offering a powerful, loving, and much-needed voice in a time marked by anger, prejudice, and divisiveness. Adapted from an address he gave to New Ways Ministry, a group that ministers to and advocates for LGBT Catholics, Building a Bridge provides a roadmap for repairing and strengthening the bonds that unite all of us as God's children. Martin uses the image of a two-way bridge to enable LGBT Catholics and the Church to come together in a call to end the 'us' versus 'them' mentality. Turning to the Catechism, he draws on the three criteria at the heart of the Christian ministry-'respect, compassion, and sensitivity'-as a model for how the Catholic Church should relate to the LGBT community.

Building a Bridge: How the Catholic Church and the LGBT Community Can Enter into a Relationship of Respect, Compassion, and Sensitivity