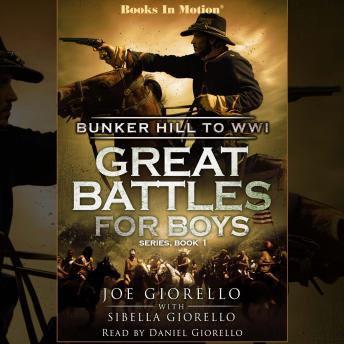 Does your child play video games for hours but dreads picking up a book? Do they think history is just a bunch of boring old facts? What if you could give them all the excitement of screen time but also spark their love of reading and history? You can with these exciting tales of military battles written especially for boys who are reluctant readers. Popular history teacher Joe Giorello's hugely successful class, "Great Battles for Boys" is now an engaging and bestselling non-fiction series written for boys ages 8-14. Great Battles for Boys takes kids to the front lines of iconic battles. In this volume of the popular history series, find out which strategies, weapons, and military leaders won - or lost - these famous American fights. And none of it's boring. Bunker Hill: Ragtag colonists take on the mighty British Red Coats. Saratoga: Gentleman Johnny Burgoyne gets a lesson in warfare from untrained militias. Gettysburg: The slaughter of brother against brother that provoked the Emancipation Proclamation. Antietam: An invasion gone wrong. Vicksburg: A Southern city under siege. Little Big Horn: Custer's Last Stand. The Alamo: Why we remember it! San Jacinto: The battle that won the southwest for America. The Rough Riders of San Juan Hill: Teddy Roosevelt, Medal of Honor winner. WWI's Lost Battalion: The Great War and the Americans who fought it.