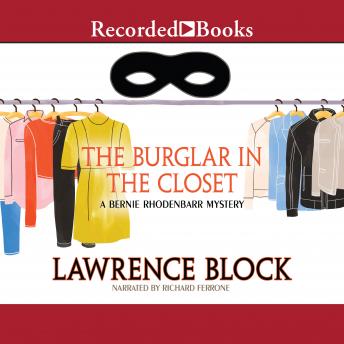 The Burglar in the Closet

Popular author Lawrence Block creates the wild and wonderful world of Bernie Rhodenbarr: fine, upstanding citizen by day, and crafty burglar by night. In this hilarious whodunit, Bernie does a favor for his dentist, only to discover mixing his personal and professional lives can be hazardous to his well-being. As Bernie squirms in the dental chair, Dr. Sheldrake presents a business proposition. He wants Bernie to rob his estranged wife's apartment while she's out enjoying the New York City nightlife. Bernie would get her fabulous collection of jewels, and Dr. Sheldrake would only take 20% of the profits. The plan sounds foolproof, so why has Bernie found himself locked in Mrs. Sheldrake's closet? Winner of three Edgar and four Shamus Awards, Lawrence Block creates plots that twist around every corner and packs them with fun-loving characters. You'll want the quirky Bernie and his companions for your very own friends, as gravelly-voiced narrator Richard Ferrone brings them vividly to life.

Burglar in the Closet