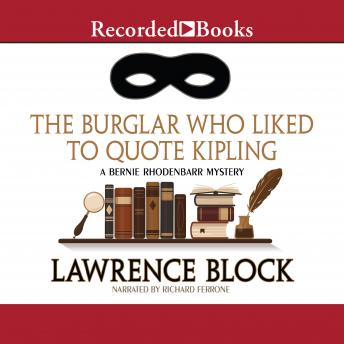 The Burglar Who Liked to Quote Kipling

Best-selling author Lawrence Block will keep you hooting with laughter as you follow the hilarious hijinks of his incorrigible character, Bernie Rhodenbarr: notorious burglar and part-time sleuth. Trying to go legit, Bernie has taken over a secondhand bookstore in Greenwich Village, but he still can't resist stealing things when the rewards are right. Ever since he bought Barnegat Books, Bernie has been having trouble making ends meet. When a mysterious client asks him to steal a rare edition of Kipling's poetry, he seizes the opportunity to practice his criminal talents and pay his creditors. Pilfering the book is boringly easy. But delivering it is difficult-with the police and a host of shady assailants hot on his heels. A Mystery Writers of America Grandmaster, Lawrence Block packs his entertaining whodunits with plenty of action and unexpected plot twists. Richard Ferrone's gravelly voice and expert pacing will keep you glued to the tape deck as Bernie lands in one dangerous scrape after another.

Burglar Who Liked to Quote Kipling