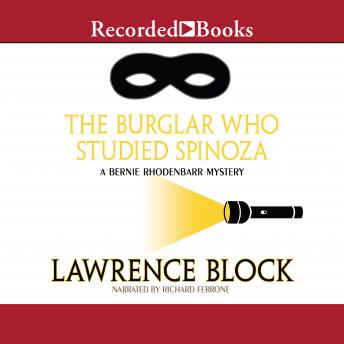 The Burglar Who Studied Spinoza

Best-selling author Lawrence Block exposes the wickedly exciting double life of Bernie Rhodenbarr-respectable bookseller by day and notorious burglar by night. In The Burglar Who Studied Spinoza, Bernie applies philosophy to match wits with a wily murderer and a few too many burglars. Bernie and his dog-grooming partner in crime, Carolyn, are planning the perfect crime. Tonight, they will rob a brownstone while the well-heeled owners are out of town with their vicious watch dog. But when Bernie painstakingly picks the lock, they discover somebody has already emptied the house-except for a valuable coin almost too hot to handle. Lawrence Block's finely-crafted plots and well-drawn characters have earned him three Edgar Awards and the title of Grand Master. With his deep, gravelly-toned narration, Richard Ferrone provides the perfect voice for the book-loving thief and his sophisticated friends as they land in one hilarious scrape after another.